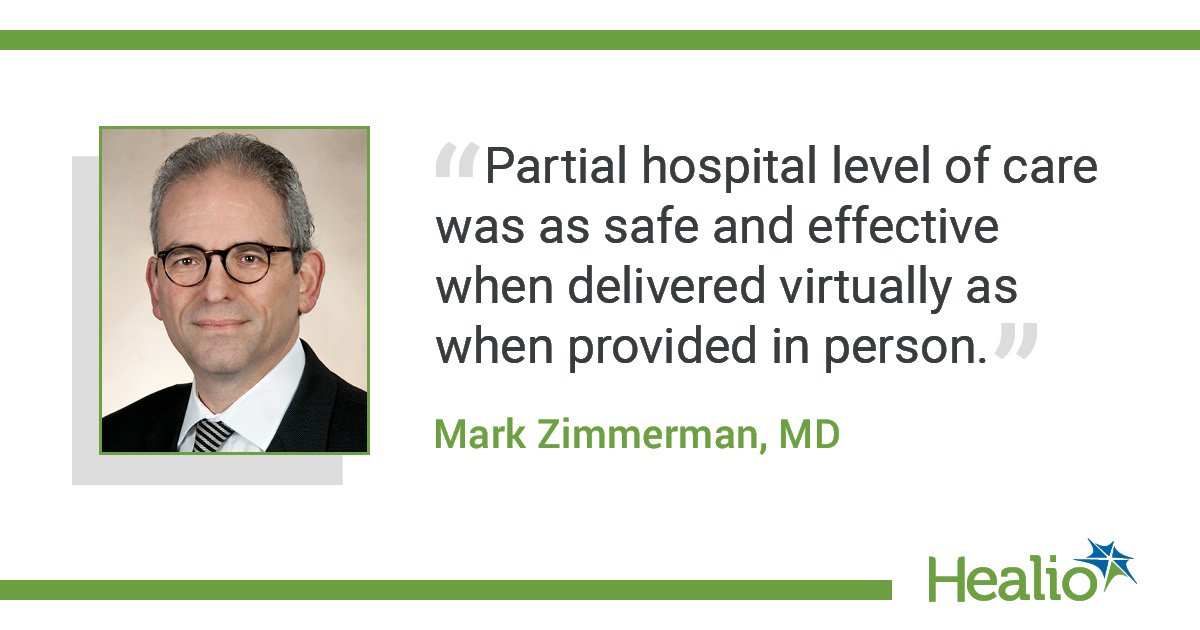 Telehealth treatment in an intensive acute care psychiatric setting was associated with equivalent patient satisfaction as in-person treatment, according to study results published in Journal of Clinical Psychiatry.

“There are no prior studies of the effectiveness of telehealth platforms to provide treatment in a partial hospital program,” Mark Zimmerman, MD, of the department of psychiatry and human behavior at Brown Medical School in Rhode Island, told Healio Psychiatry. “Patients in partial hospital programs tend to be more severely ill than in outpatient settings, so an important question was whether treatment would be as safe and effective as in-person treatment. Also, we were interested in whether patient satisfaction would be as high using a virtual format as in-person treatment.”

As part of the Rhode Island Methods to Improve Diagnostic Assessment and Services project, Zimmerman and colleagues assessed the effectiveness of a partial hospital program, which consisted of daily individual therapy sessions between 30 to 45 minutes and daily meetings with a psychiatrist, as well as a virtual program that included three daily therapy groups plus an optional mindful meditation group. The researchers analyzed data of 207 individuals treated virtually between May 2020 and September 2020, as well as of a comparison group of 207 individuals treated in the in-person partial program the year prior. Self-administered patient measures assessed patient satisfaction, symptoms, coping ability, functioning and general well-being.

Findings demonstrated high patient satisfaction with treatment for both the in-person and telehealth methods of partial hospital level of care delivery. Patients reported a substantial decline in symptoms and suicidality from admission to discharge. Results of the primary outcome measure, the modified Remission from Depression Questionnaire, revealed functioning, coping ability, positive mental health and general well-being significantly improved in both groups. Moreover, the researchers observed a large effect size of treatment among both treatment groups, with the only significant difference in patient outcome according to treatment format being a longer length of stay and increased likelihood for staying in treatment until completion among patients treated virtually.